Do You Believe in Magic? - by Paul Offit MD 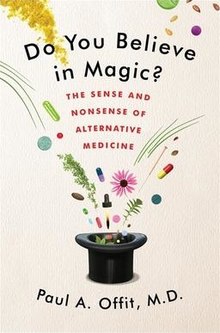 One of my pet peeves is homeopathy. I have nothing against natural medicine - many of the pharmaceuticals out there come from plants or are related to chemicals that come from plants - but homeopathic medicine just pisses me off. The reason is that it is based on two ridiculous assumptions: 1) that like cures like - this is based on the fact that quinine taken in large enough doses causes fever like symptoms which are similar to the malaria is also cures, 2) that diluting something until it is not even there still leaves energy traces or something in the water it once touched. This is the basis for homeopathy - that quinine, which cures malaria, causes symptoms somewhat similar to malaria in large doses. To me this is like saying that since I once had a headache and had a glass of water before the headache went away that water cures headaches.

I was expecting this book to be a debunking of "alternative" medicine and it largely was. But it also made some points in favor of alternative medicine which I had never really considered.

As a science-minded person I know that research shows that vitamin C does not cure colds, cancer or most illnesses besides scurvey. But still when I get a sore throat I want to take vitamin C. Even knowing that the myth that it boosts your immune system was largely created and promoted by one man, Linus Pauling, and is mostly an invention of the media, I still believe it. Even knowing better I still feel like it helps me when I get a cold. This is because of the placebo effect which is very real. This is why in clinical studies they test medications against placebos - because just believing that something will help tends to make it actually help.

While the benefits of most alternative medicine are not supported by science (if they were they would be regular medicine instead of alternative), the placebo effect makes this a somewhat murky area. When people go to the doctor for a cold there is generally not much the doctor can do. Antibiotics won't help with a cold (which is a virus) and will just promote antibiotic-resistant bacteria, but most patients expect the doctor to prescribe something. My father is a doctor and when I was a child he would tell me about some of his older patients who he would give a vitamin B12 shot to every time he saw them. He said they expected some kind of medication and they seemed to like the brightly colored vitamin B12 injections so he would give them one. Now with pharmaceuticals advertised on TV he doesn't have that option - the patients come in requesting a specific medication and he can either give it to them regardless of whether they need it or not or let them go away angry and dissatisfied. Of course this is why big pharma loves advertising direct to consumers, but it results in a lot of people taking a lot of medication they don't need, that probably won't help them, and that which may have negative side effects.

In this story the witch doctor is providing a valuable service - the people who don't need medical attention get to feel better because they talked to someone who listened and gave them something. Whether what they were given actually helps is irrelevant since their problems will resolve on their own. The people who actually need medical attention are referred to the medical doctor. The difference between this story and the reality of today is that the witch doctor knew what his limits were and when to refer patients to a level of care they need. Today most alternative healers do not believe in scientific western medicine and warn their patients away from it.

There is an entire field of medical research devoted to placebo medicine so placebos definitely have a place in medicine. However for them to work requires that the patient believe it will work and the patient is unlikely to believe that if the healer does not. There is a fine line between the need for alternative healers to believe in their remedies and also be aware of when their patients need actual scientific medical care. If they can manage this I think alternative medicine has a valuable place in medicine. Unfortunately it seems that most healers are not aware of their limits.