The Kidnapping of Edgardo Mortara - by David Kertzer 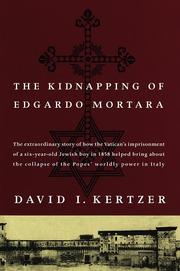 I was familiar with the case of Edgardo Mortara from having read Henry Charles Lea's "History of the Inquisition of the Middle Ages" and I am very interested by the subject of the crazy things that are often done in the name of religion, so when I found out that this case had an entire book written about it I was anxious to read it.

For those who are not familiar with this affair here is a quick summary: In Italy in 1858 the pope was still the temporal leader of at least part of the territory, and church law said that a Christian child could not be raised in the Jewish faith. Jewish families frequently hired Christian servants because they could do things prohibited to the Jews on the Sabbath, such as light fires. The Mortara's had such a Christian servant, and when one of their young children was ill the servant thought he might die and secretly baptized him so that he would not go to hell. Years later, the Church found out about this and came to take the child away so he could be raised Catholic.

If you are interested in the full details of this case, this book provides a very detailed and rich description of the kidnapping, the laws at the time, public response to the affair, and the eventual political consequences, which include the pope's temporal powers being dimished by the unification of Italy.

It was rather shocking to learn that at the same time as the Civil War was being fought in the United States the laws of the Papal States were still incredibly anachronistic and had not evolved all that much since the Middle Ages. Pope Pius IX, who initially had seemed to be a reformer who would bring the church into modernity, ended up becoming reactionary in response to the Italian unification movement and the threat of losing his temporal kindgom. While he had initiated some reforms regarding the Jews, such as tearing down the gates of their ghettos and relaxing the restrictions on them, in this matter he refused to budge and Edgardo never returned to his family and eventually became a priest who tried to convert other Jews.

I would say this book is a must read for anyone interested in this period of European history, Italian history, or the history of the Catholic church.