Book: Who Stole the American Dream? 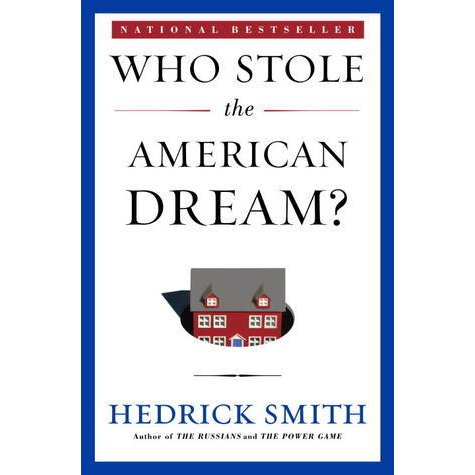 Who Stole the American Dream, by Hedrick Smith, is about exactly what you would expect. It explains how and why the wealth in the United States has become so concentrated in the hands of the few. Back in the 1950s and 60s, in what is considered by many to be the height of American prosperity, corporations would act for the benefit of all their stakeholders - their employees, their consumers, society in general. At some point the focus shifted to be on maximizing shareholder value - which means trying to maximize stock price at the expense of everything else.

The idea of maximizing shareholder value was promoted by Milton Friedman and the Chicago School of Economics, and like most of their ideas, is a lot better in theory than in practice. The stock market today focuses only on the most recent news and earnings and will punish a small drop in earnings dramatically. This leads corporations to try to maximize their quarterly earnings and ignore any long term considerations. The fact that CEOs get a large portion of their compensation as stock options only increases the incentive for management to focus exclusively on the short term. In the past corporations would regard their employees as long-term assets, and would provide pensions and job security. Today they are more likely to hire the least expensive employees they can find, often in third world countries, and they will offer 401(k)s which require the employees to fund their own retirements. So the working class loses their jobs to offshoring and who benefits? The CEOs who receive massive compensation packages - and the stockholders, who tend to be wealthy individuals.

The book covers a lot of different issues, far too many for me to recount here. The rise of the 401(k) is just one example of how the government has been corrupted by the corporations and the super-rich. Starting in the 1970s, corporations started to take more of an interest in politics, and that influence has grown steadily since. First loopholes in campaign finance laws were used for the wealthy to buy influence with politicians, and then Citizens United basically blew the doors wide open for the wealthy to control the government.

Thomas Picketty, a French economist, wrote a book about why wealth inequality keeps growing, and it basically boils down to one simple equation: r > g, which means that the return on capital is greater than economic growth. What this means is that those who have money and invest it will make more return on their income (r) than those who works for a living and are dependent on rising wages for greater income. This depends on economic growth (g). This will inevitably lead to wealth concentration, as those who have money can invest it and make more money, while the incomes of those who work for a living are tied to economic growth.

The book was very comprehensive in addressing the numerous economic and political aspects of this issue. It covers so many different topics one could almost say it was a bit rambling at times. However it was well written enough that the flood of information was never overwhelming. I highly recommend it.